Yesterday I wrote that I had gone to the hardware store to buy
a hex wrench for a new knife that I bought. The knife is a KA-BAR
Becker BK2. 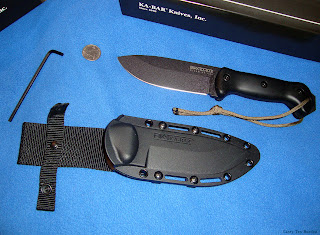 This is kind of a poor person's heavy duty knife. There are people that
swear by the Becker BK line and think they are the best thing since
sliced bread. Then there are those that never eat bread, sliced or otherwise.
The jury is still out with me. I need to work on the edge a bit. The sheath
was so tight that I had to put the dang thing between my feet and pull with
two hands to get it out. I fixed that problem by leaving the knife half in
and half out of the sheath for about 24 hours. The hex wrench is to tighten
the grip panels. I think I will do as suggested and Loctite Blue them. I'm not
posting the specs as they can be found all over the net.
If the story is true, this is why KA-BAR brand is called... KA-BAR. A long
time ago a fur trapper wrote a testimonial to the company. It was written in very
rough English. He had written that when his firearm failed him, he turned to his
knife to "kill a bar" that was wounded and attacking him. But the way he had
written it, it looked like "ka bar". And there ya go. The company had a name.
I would've been waiting for that guy back in the car. I ain't a bear person.
Posted by Lizzy Tex Borden at 1:38 PM