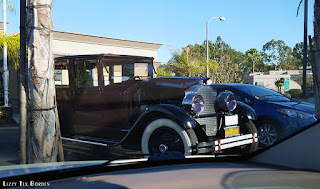 I think I parked next to Clyde Barrow.
Posted by Lizzy Tex Borden at 11:00 PM 0 comments

I have wanted a strop for my knives for a long time. About a
year ago, still unsure of which strop I wanted to buy, I posted
a picture of this piece of leather that I bought at the Indian Store.
I bought it during the Halloween Crawl that my son and I go on
once a year. I bought the scrap piece and cut it down. It has been
a pretty good stand in... 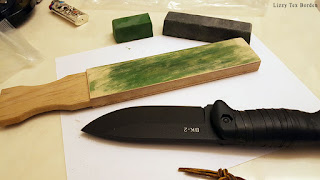 ...until recently when I finally decided on this strop from Bark
River Knives. This strop is two-sided and came with two compounds.
One is a little grittier than the other. Strops are used to straighten and
polish an edge. They can prolong the life of a blade as they do not remove
as much steel as sharpening on a stone or ceramic does, if any. 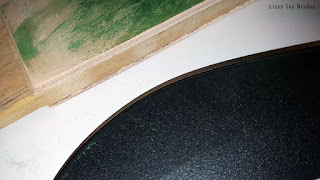 I am not very good at it, and maybe I will never be that good at it,
but I think I am good enough to make it work for me. That's a
real purdy edge on my Becker BK2 if ya ask me.
Posted by Lizzy Tex Borden at 11:00 PM 0 comments 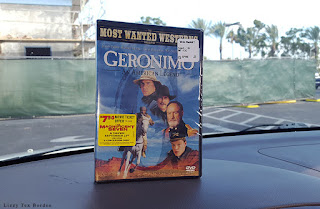 I bought this movie, "Geronimo - An American Legend" on DVD.
It has a pretty good cast and I am going to give it a shot.

Plus it has a code for $7.50 off of a ticket for the new "Magnificent
Seven" movie. I got one of these coupons a week or two ago with the
DVD, "The Missing", so now I can take a date. Hoo-rah! 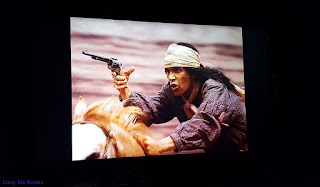 I watched "Geronimo - An American Legend". The movie was pretty good.
I give it about six out of ten pack mules. But, apparently accurate history it is not.
And I have had one or two DVDs that have bad specifications on the covers like
this one. It told me that it was in both wide and fullscreen. It lied. Had I known
that it was ONLY a fullscreen presentation I would have passed on the purchase.

Once you watch it for a while, you kind of get used to seeing only part of
the picture, but I would not voluntarily watch movies in fullscreen format.

(Please excuse my grammar and punctuation. I am almost SURE that it
is worse than usual with this post. I have no real way of knowing.)

Well will you just take a gander at this! So cool. I found 200 more rounds
of .22 ammunition at Walmart. Things are looking up, at least temporarily.

We will know more after November. One thing is for sure,
they cannot keep us down. They will not win. It is not in the cards.

This is America.
Posted by Lizzy Tex Borden at 10:30 PM 0 comments 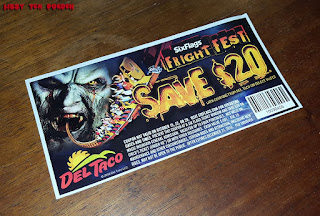 I am SO far away from being a fan of Magic Mountain, BUT...
I AM a fan of Halloween stuff and cool artwork and so this
coupon from Del Taco gets my attention.
Halloween mood stuff. Yeah.
Posted by Lizzy Tex Borden at 11:49 PM 0 comments 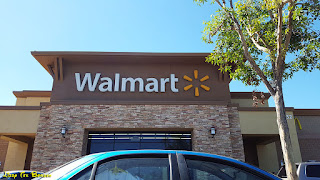 Salagadoola mechicka boola bibbidi-bobbidi-boo.
Put 'em together and what have you got?
Bippity-boppity-Walmart. 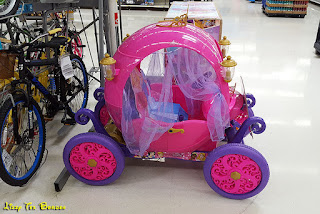 I would have been all OVER this when I was little.
But I'm afraid it would not have been in our budget. 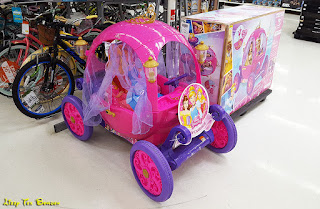 Behold the 24-Volt Disney Princess Carriage! This beauty runs for
45 minutes at a time. It seats driver and passenger. It has forward
and reverse and zips along at 5 miles per hour. The dang magic
wand lights up AND features enchanting fairy tale sounds.

I would have LIVED in that thing. I would have taken my meals
in it. I would have parked it in front of the television set every
night and imagined I was at the drive-in theater. I would have
driven it to the San Fernando Valley to visit and swim in my friend's
pool. And if I could have fit my pillow in there with me, I would
have slept in it.

My childhood was great and I wanted for nothing.
But... well, 5 MPH would have been cool.
Posted by Lizzy Tex Borden at 12:30 AM 0 comments 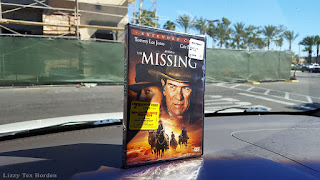 I bought "The Missing" on DVD. This movie was made in 2003
and was directed by Ron "Never Disappoints" Howard. I have
no idea how this one slipped under my radar for so long.

It stars Tommy Lee Jones and Cate Blanchett. This movie is pretty darn
brutal in parts. Can you say "suffocating in cowhide over an open...." Nope!
No spoilers. Eric Schweig as Pesh-Chidin aka El Brujo is outstanding.
As Josey Wales would say, this guy is just plum mad-dog mean. Above is
Mr. Jones on the Borden Cinema screen as Chaa-duu-ba-its-iidan  which is
Apache for.... Naw, I can't tell you. You need to see this movie. I will
definitely be watching this movie again sometime down the line.

I also took advantage of the deal this DVD offered and printed
out a coupon for $7.50 which is good towards a ticket to see the
new "Magnificent Seven" movie that is about to be released. I
was going to see it anyway so.... DOUBLE win.
Posted by Lizzy Tex Borden at 12:18 AM 0 comments 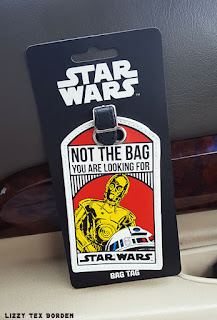 I cannot resist a cool luggage tag.
I have a bunch of them. I have no
luggage, but I have a lot of tags.
Posted by Lizzy Tex Borden at 10:38 PM 0 comments 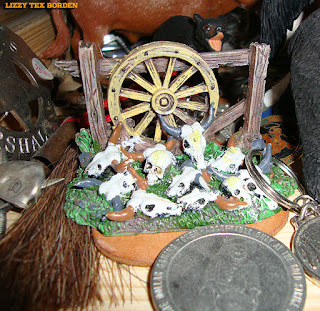 Just a random picture today of
some stuff in one of my cabinets.
Posted by Lizzy Tex Borden at 3:30 AM 0 comments 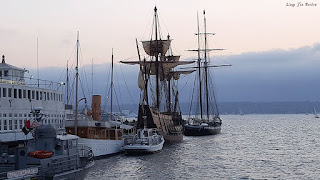 This is another picture I took at the Maritime Museum in San Diego
on the way to the airport a week or two ago. There are a lot of boats
in this picture but the one I know about is the San Salvador. That is the
very old type looking brown ship you see. That is the ship that brought
Juan Rodriguez Cabrillo to San Diego in 1542. Of course THIS
San Salvador is a recreation. 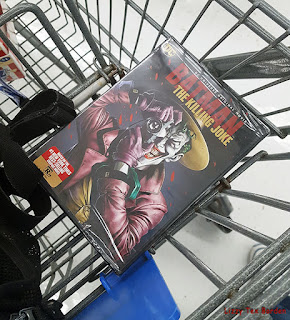 I bought "Batman The Killing Joke". I do not ever buy graphic
novel type movies like this but I saw the trailer for it on the
"Batman v Superman" blu-ray and it looks interesting.... and dark.
I like dark. So, my curiosity was peaked and here I am.
Mark Hamill is the voice of The Joker. And that is cool.

But this could be a huge fail.

I like that they actually call it "Movie Candy". For those
of us that love watching movies it just kind of adds
to the whole experience. File it under "Sometimes
Things Are Just What You Make Them".
Posted by Lizzy Tex Borden at 9:00 PM 0 comments 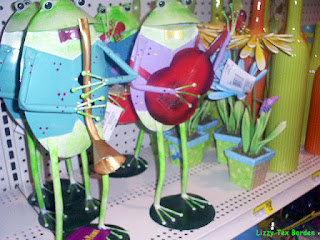 Ah, sugar... Ah, honey, honey. You are my candy girl,
And you got me wanting you.*
*Sugar Sugar by The Archies 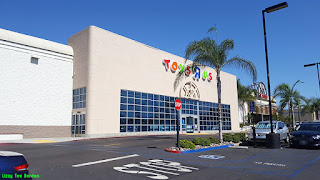 I have been trying to be good for a while now. I have way too many
movie figures and I am just holding out for Ten Star (in my budget)
figures these days. But my car, it just... dragged. me. over there.

The action figure section seems to move further and further back
and get smaller and smaller. But sometimes.... hidden gems. 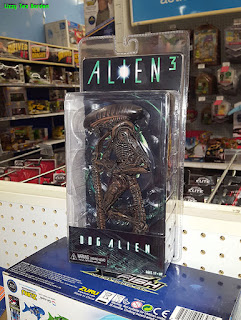 Not so much a hidden gem today, but I am a sucker for "Alien"
Xenomorph figures. This NECA  Xenomorph is from "Alien 3"
and is a "dog" alien, meaning it's host was a poor dog, torn to
shreds during the alien's "birth". Not my favorite Xenomorph,
but like I said, I am a sucker.

Must not stop at Toys R Us for another year.
Posted by Lizzy Tex Borden at 11:45 PM 0 comments 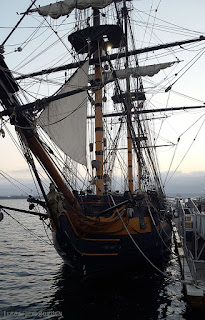 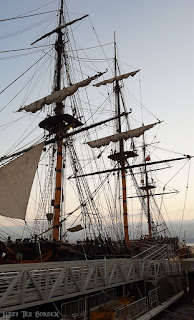 I recently went to the San Diego Airport to pick somebody
up and before I arrived at the field I had to park a few minutes
in an effort to get my bearings. The freeways around there are
sometimes (for me) not easy to navigate. So I pulled into a lot,
got out of the car and put a few coins in the meter. All of a sudden
I looked up and realized that I was at the Maritime Museum of San
Diego and I was surrounded by ships and submarines.

I took a few pictures and the tall ship you see here is the HMS Surprise.
The Surprise is a replica ship built in Canada in 1970. In 2001 the
Surprise was sold to 20th Century Fox to be used as the Royal Navy
frigate Surprise in the movie "Master and Commander: The Far Side
of the World". In 2007 she was sold to the Maritime Museum and
restored and sails several times a year. She is beautiful.

And she was also used in "Pirates of the Caribbean: On Stranger
Tides" as the HMS Providence. That was in 2010. Savvy?
Posted by Lizzy Tex Borden at 9:00 PM 0 comments

No problemo.
Posted by Lizzy Tex Borden at 11:46 PM 0 comments 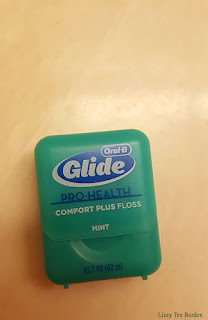 I took this picture with my phone so I can
remember this floss when I go shopping.
This floss sucks. It breaks.
All the time.
No good.
Posted by Lizzy Tex Borden at 6:08 PM 0 comments

Go back in time with me if you will, back to a happier time.
Today! 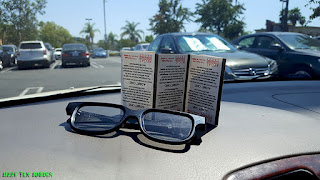 I saw "Suicide Squad" today. I had heard bad things, but I
thought it was good. I thought Jared Leto's Joker was good.
He sure is purdy. Anyway, Margot Robbie's Harley Quinn
was good. Will Smith's Deadshot was good. I had fun with it
and I will buy it when it comes out on Blu-ray. That is more than
I can say about a few of the movies I have seen lately. 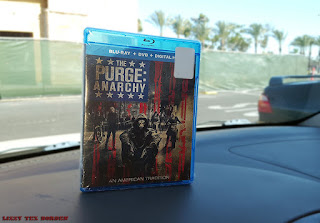 I have been waiting to see "The Purge: Anarchy" for a loooooooong
time. I never wanted to pay 15 or 24 bucks for it. I waited it out. Today
I found the one and only copy (at least for now) at the bottom of the
$7.88 bin at Walmart. Good deal. It might be good. Now I am holding
out for a deal on the third one.
Posted by Lizzy Tex Borden at 11:30 PM 0 comments 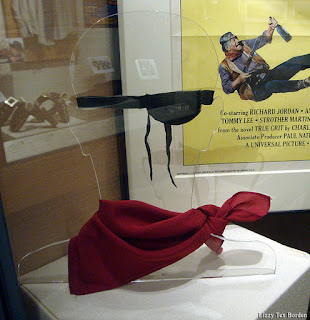 From my 2012 visit to the Gene Autry Western Heritage Museum
in Griffith Park, Ca... This is John Wayne's iconic eyepatch and
bandana from his movie "True Grit" (1969). Of course we know there
were more than one of each, but perhaps these were screen used.
You never know. Note that you can see through the patch. That
must have come in handy.
Posted by Lizzy Tex Borden at 5:00 PM 0 comments 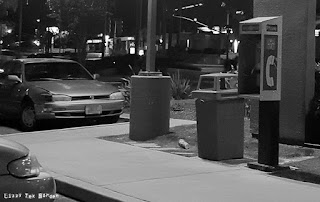 Pretty sure this phone is used for only one thing,
and that would be calling Dr. Feelgood.
Posted by Lizzy Tex Borden at 1:00 AM 0 comments 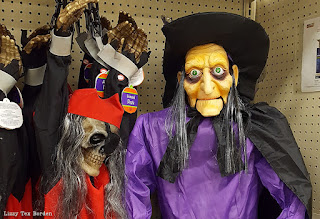 These two must have had an interesting exchange.
Big Lots has Halloween stuff! Yeah, I know it is a little early.
But for those of us who enjoy Halloween items year round,
no complaints.

It will not be long now before we go on our Annual Halloween
Crawl for 2016! There are many bones in our future.
Posted by Lizzy Tex Borden at 10:30 PM 0 comments 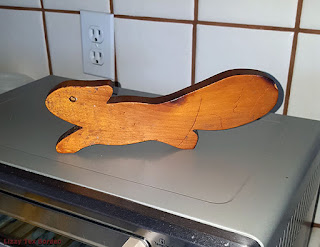 I had never seen an "oven squirrel" until I saw my mom's.
Maybe I am sheltered. These guys are great. If you have
never seen one, you use them to slide hot oven racks in and
out as needed and generally just moving hot stuff about.

I looked them up online and there are lots of different looking
squirrels. My mom's here looks to be pretty generic. I will
never not have an oven squirrel now that I know about them.
This poor guy's tail is slightly scorched but he never falters
in his duties.
Posted by Lizzy Tex Borden at 11:30 PM 0 comments